On the sturdy, plastic dashboard of his trusty, one-man spaceship,
Glued with resin-paste extracted from an alien-beastie’s spleen,
Our intrepid space explorer, Charlie Whinesworth, keeps a trinket,
Sentimentally significant: an ivory figurine.
...

So begins the humorous narrative sci-fi poem, "Charlie Whinesworth's Lucky Trinket", which explains the troubled relationship between the celebrated space explorer and his eternal nemesis, the genocidal maniac, Reggi Farner.

The two characters, Whinesworth and Farner, were created by my brother, Stuart, for a homemade, choose-your-own-adventure storytelling game we  invented in 1978, called "Blasers and Beasties". B&B adventures were always puzzles involving space explorers, typically having crash-landed on some planet and needing to rescue themselves (and if possible, also profit).  The game required one storyteller and one player, who made the choices for his fictional explorer-protagonist. Charlie Whinesworth's was the name Stuart usually gave to his heroic character. But on days when he was feeling rascally (or perhaps for sheer variety), he would play "Reggi Farnsworth", whose invented goal was to murder every fictional alien, human, or creature he met in the game. This poem is about both characters.

The poem will soon appear in a collection of science-fiction short stories, "Lockdown Sci-Fi, #4, to be published February 3, edited by the good folks at Black Hare Press. 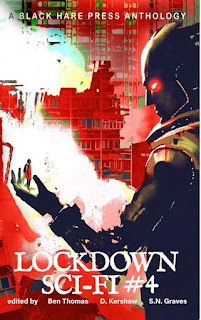 More about B&B, which inspired the poem: The game was inspired by the descriptions of two adventure story games that my brother, Stephan, related having experienced during his first year away at college. First, the burgeoning dice-dependant fantasy classic, Dungeons & Dragons, by Gary Gygax and Dale Arneson (published four years earlier). and the seminal computer text-adventure game, "Colossal Cave Adventure" (aka "Adventure" or "ADVENT"*), released in 1976 by Will Crowther and expanded on in 1977 by Don Woods. (I'm guessing my brother played the latter version on the University of Dallas mainframe. Interesting side note, he explained that the command line activation code for the game was "Adventure", but because the program only read the first five characters of any input, "Advent" was sufficient and the shortcut most users became accustomed to.)
Having access to neither dice nor computers, B&B (obviously named to echo D&D) relied on multiple choice options (with some latitude, thanks to a human storyteller), the outcomes for which were mostly predetermined.
Except for theme, a fixed story world, style differences (cheap manufacture was a running gag), and conventions (e.g., standard rayguns were "blasers", extra-terrestrial humanoids were "aliens" and critters were "beasties"), the gameplay was most similar to that in the "Choose Your Own Adventure" book series (which emerged the following year, 1979). Our younger brothers, Shannon and Scott, both furthered game development, indepentantly inventing numerous adventures and introducing original game elements (time pressure, time-travel, recurring characters, etc.)

Finally, there happens to be one more poem of mine (to date) inspired by a B&B character, but this one invented by my mother, June. She called her protagonist "Mary Crockett", and favored xenobotony storylines. "Mary Crockett's Garden" has yet to be published, but it's quite a fun piece, so stay tuned.